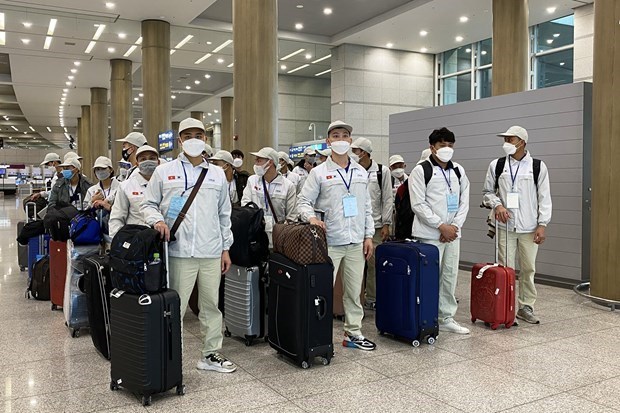 Labour, employment and social cooperation between Vietnam and the Republic of Korea (RoK) since the two countries established diplomatic relations 30 years ago have contributed to producing economic benefits to both peoples and enterprises of the two countries, according to Deputy Minister of Labour, Invalids and Social Affairs Nguyen Ba Hoan.

Jointly organised by the Ministry of Labour, Invalids and Social Affairs (MoLISA), and the Ministry of Employment and Labour and the Embassy of the RoK as part of the activities to celebrate the 30th founding anniversary of the Vietnam – RoK diplomatic ties, the event aimed to review cooperation in labour, employment and social affairs between the two nations.

In the webinar, participants focused their discussion on issues related to labour and migrant workers, and skill development, which they said are a pillar of the bilateral cooperation.

They shared good models of labour cooperation, such as programmes for workers returning to Vietnam from the RoK and partnership between universities of the two countries.

Reports presented at the webinar showed that at present, there are 39,659 Vietnamese labourers working in the RoK, earning monthly salaries of 1,400 – 1,800 USD. Meanwhile, more than 9,000 Korean-invested enterprises are operating in Vietnam, creating jobs for over 700,000 labourers.

Over the recent past, Vietnam and the RoK have rolled out various activities in the fields of labour, vocational training, social welfare, and gender equality, bringing in economic benefits for the peoples and firms from the two countries.

Regarding vocational training, the RoK is a leading strategic partner with many programmes, projects and activities that support the development of Vietnam’s system in this field.

More than 9,000 foreign direct investment (FDI) enterprises of the RoK are operating in Vietnam’s industrial fields. These areas include construction, agriculture, tourism, services and export.

According to Deputy Minister Hoan, the MoLISA and the RoK ministry signed cooperation agreements many times from 2004 to 2019, which set up medium- and long-term partnerships as well as expand comprehensive cooperation activities between the two countries in labour, employment and social welfare.

The two sides are to promote and expand programmes focusing on a number of key contents such as infrastructure, and financial and technical cooperation on the implementation of skilled human resources development projects.

They have also planned to expand the scale and diversify forms of labour cooperation including licensing mechanisms, seasonal workers, holiday workers and labour in specific fields, Hoan stressed, adding that Vietnam and the RoK also plan to maintain cooperation activities to promote social security and ensure sustainable development goals.

For his part, Kwon Gi-seob, Deputy Minister of Employment and Labour of the RoK, said after the two countries signed a memorandum of understanding on the Employment Permit System (EPS) programme in 1993, his country has since received many Vietnamese workers under the scheme. The RoK has exerted solid efforts to maintain the upward trend.

Vietnamese sailors and workers in other sectors are also preparing to go to work in the RoK. Together they have helped to bridge the gap and fostered a sound relationship between the two sides. This is especially so in the field of labour and employment, the RoK official went on.

In the context of their growing labour cooperation, the two countries have worked together to seek measures to improve the efficiency in supporting Vietnamese labourers working in the RoK.

The Vietnamese Embassy in the RoK and the MoLISA jointly organised a workshop in Seoul in late August, focusing on giving consultancy for employees, and discussing common issues related to salary, salary debt, work changes, and insurance for them.

The event, one among a series of the events to celebrate the 30th anniversary of the establishment of the two countries’ diplomatic relations, also aimed to review the activities to bring Vietnamese workers to the RoK over the past 30 years, and assess the support for these guest workers.

According to Vietnamese Ambassador to the RoK Nguyen Vu Tung, labour cooperation has brought economic benefits to the two countries’ peoples and businesses.

In the photo: Vietnamese labourers travel to the RoK to work (Photo: VNA)

Along with the significant increase in the number of Vietnamese workers in the RoK, the consultancy and support are also carried out systematically and effectively, he said.

The workshop also offered an opportunity for the centre to share their operational models to support foreign workers living and working in the East Asian nation, thereby contributing to improving the efficiency of support to Vietnamese guest workers there.

Representatives of the Korea Support Centre for Foreign Workers also discussed the receipt of pension insurance for employees and the issuance of the identity card for foreigners in some special cases.

In mid-August, a meeting was also held in the RoK, offering a venue for Vietnamese labourers working in the country within the EPS programme to raise questions relating to their rights, interests and obligations. This was the first in-person legal consultation for the Vietnamese employees after a two-year hiatus due to the COVID-19 pandemic.

About 205,000 Vietnamese are living, working and studying in the RoK./.