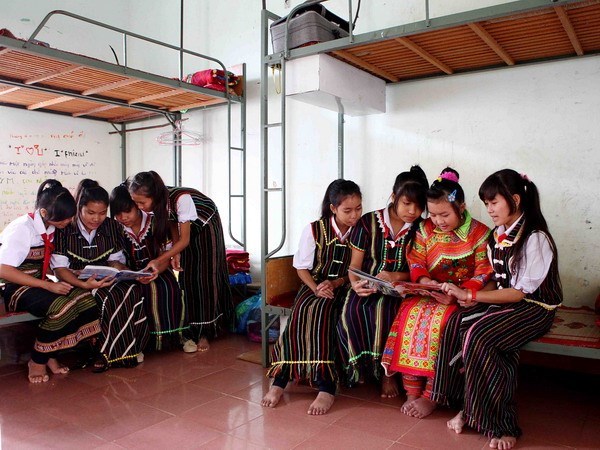 Prime Minister Pham Minh Chinh told a plenary session of the high-level forum on the Fourth Industrial Revolution held recently in Hanoi that ensuring wealth, happiness, democracy, a peaceful life, security, safety and social welfare for a population of nearly 100 million is the most crucial task.

The Government leader stressed that people is the most important factor in the adaptation and development of each nation in the digital era and the mitigation of impacts of the COVID-19 pandemic.

In the cause of Doi moi (Reform), the Vietnamese State has regarded people as both the target and driving force of development. Therefore, all socio-economic development policies and programmes adopted by the State have put people at the centre to better meet their legitimate needs.

Vietnam’s achievements in socio-economic development and international integration have created resources for the country to better ensure the basic human rights of its citizens.

The most outstanding achievements Vietnam recorded in human rights can be seen in poverty reduction, human development and the improvement of people’s living standards.

As of 2020, the rate of poor households in Vietnam dropped to 2.75 percent. Its fulfillment of the MDG on poverty reduction has been acknowledged by the international community.

All civil and political rights are better ensured. More than 900 registered press agencies are active in Vietnam. Over 70 percent of the population have access to the internet on a daily basis and among them, 95 percent use social media for educational and business purposes. People participate in and provide their inputs to the drafting of legal documents, including by using online tools.

In Vietnam, multiple religions and beliefs coexist in harmony, and together make significant contributions to the country’s development. Over 95 percent of Vietnam’s population profess a particular belief and religion, and over 26 million people are religious devotees (almost 27 percent of the population).

Over the past three decades, Vietnam has made big strides in human development index (HDI) and been listed among countries with the highest HDI.

The 2020 Human Development Report “The Next Frontier – Human Development and the Anthropocene,” released on December 15, 2020 by the United Nations Development Programme (UNDP) shows that Vietnam’s HDI value for 2019 is 0.704, putting the country in the high human development category and positioning it at 117 out of 189 countries and territories. Between 1990 – 2019, the country’s HDI value increased by almost 46 percent, which is among the highest HDI growth rates in the world.

Vietnam has also been performing well in terms of gender equality. With the Gender Development Index value of 0.997, it ranks 65th out of 162 countries.

She re-affirmed that UNDP stands ready to partner with Vietnam in this journey to redesign a path to progress that respects the intertwined fate of people and planet.

Vietnam has rolled out the Law on Gender Equality and the Law on Persons with Disabilities, and is working hard to consolidate the legal system in this regard.

Since the COVID-19 pandemic broke out, the Vietnamese Party, State and political system have worked hard to leave no one behind.

Over the past two years, the Vietnamese Government has issued two aid packages, one worth 62 trillion VND (2.73 billion USD) in 2020 and another valued at 26 trillion VND in 2021, which targeted those affected by the pandemic, including labourers, poor households, children, pregnant women, women with small children and social policy beneficiaries.

Since Vietnam detected the first case of COVID-19 in January 2020, the entire Party, army and people have showed their resolve and solidarity in the fight.

Many cities and provinces have driven back the pandemic successfully thanks to the support from centrally-run agencies, other localities and charity organisations. Notably, those in locked-down areas or State-designated quarantine establishments have received aid in both kind and cash from donors and the public.

The Health Ministry’s 5K message – khau trang (face masks), khu khuan (disinfection), khoang cach (distancing), khong tu tap (no gatherings), and khai bao y te (health declarations) has been viewed as an effective weapon in the combat, which has received the warm response from people across the country.

In particular, the Party and State have considered vaccine a major solution to stamp out the pandemic, and have been resolved to roll out the vaccine strategy, focusing on vaccine import, research and development, as well as the transfer of vaccine production technology.

Over the past time, Vietnam has stepped up negotiations and mobilised capital to import, study and produce vaccines. Specifically, the establishment of the COVID-19 vaccine fund has drawn the support of people and businesses at home and abroad, and international friends.

As of December 9, more than 129.4 million doses of vaccines were administered, with 73.8 million people getting the first dose and 55.5 million others receiving the second shot.

Apart from fighting the pandemic at home, Vietnam has arranged many flights to bring home Vietnamese nationals who were stuck abroad due to travel restrictions prompted by the COVID-19 pandemic.

Domestic agencies have coordinated with Vietnamese representative offices in foreign countries and domestic and foreign airlines to conduct more than 800 flights, repatriating nearly 200,000 Vietnamese from more than 60 countries and territories.

In an interview with the Vietnam News Agency (VNA), WHO Representative in Vietnam Dr Kidong Park said the world has been fighting this pandemic profusely.

The whole-of-society approach is led by the highest level of the Government, with the Prime Minister now heading the National Steering Committee for COVID-19 prevention and control. This demonstrates the strong determination of the Government to combat the outbreak situation.

There is still a lot of tasks ahead to overcome and the next few weeks will be critical. WHO remains confident that Vietnam’s robust public health emergency response is on the right track in managing the current outbreaks.

Vietnam attaches great importance to the adherence to, and implementation of international treaties in protecting and promoting human rights in the country.

Vietnam is currently State party to seven out of nine key international human rights treaties and 25 conventions of the International Labour Organisation (ILO). A roadmap has been set for future ratification of ILO Convention No. 87 on Freedom of Association and Protection of the Right to Organise.

Vietnam abides by its obligations under international human rights treaties to which it is a party, including that of reporting on their implementation in the country.

In the Southeast Asian region, Vietnam has contributed to ASEAN’s enhanced solidarity and cooperation in the promotion and protection of human rights. Its role has been particularly visible in the building of the revised ASEAN Charter, the ASEAN Community and the ASEAN Human Rights Declaration, and the establishment and functioning of ASEAN’s human rights-related mechanisms. With Vietnam joining hands, ASEAN is firmly committed to the promotion and protection of human rights in the region in conformity with the commonly recognised international standards, creating frameworks for enhancing cooperation among ASEAN members states in this field.

Vietnam has consistently been supportive of, and dutifully participating in the Universal Periodic Review (UPR). Vietnam firmly upholds the value of the UPR as an effective UN human rights mechanism for exchange of information and experience, deepening mutual understanding and cooperation on the basis of equality and transparency. In the third UPR Cycle (2019), Vietnam accepted 241 out of 291 recommendations (83 percent) and is actively implementing them through a National Master Plan. Vietnam’s initiative to develop such a National Master Plan has proven exemplarily effective since the second UPR Cycle.

With the hope of making more contributions to international efforts to promote and protect human rights, Vietnam has been running for a seat at the United Nations Human Rights Council (UNHRC) for 2023-2025. Vietnam is honoured to be nominated by ASEAN countries with high consensus to become the bloc’s candidate for the seat in the UNHRC – the UN’s inter-governmental agency comprising of 47 members in charge of promoting and protecting human rights around the globe.

Asked about the possibility that Vietnam can win a seat at the council, Diana Torres, Assistant Resident Representative & Head of Governance and Participation Unit at UNDP Vietnam told the Vietnam News Agency that “it is very possible,” adding the country is taking goods steps towards that goal.

Vietnam is working hard to bring about a happy, wealthy, democratic, peaceful and safe life to its population. With such tireless efforts and strong commitments and resolve, Vietnam is confident that it is capable of performing well the role of a member of the Human Rights Council and contribute to the council’s affairs./.