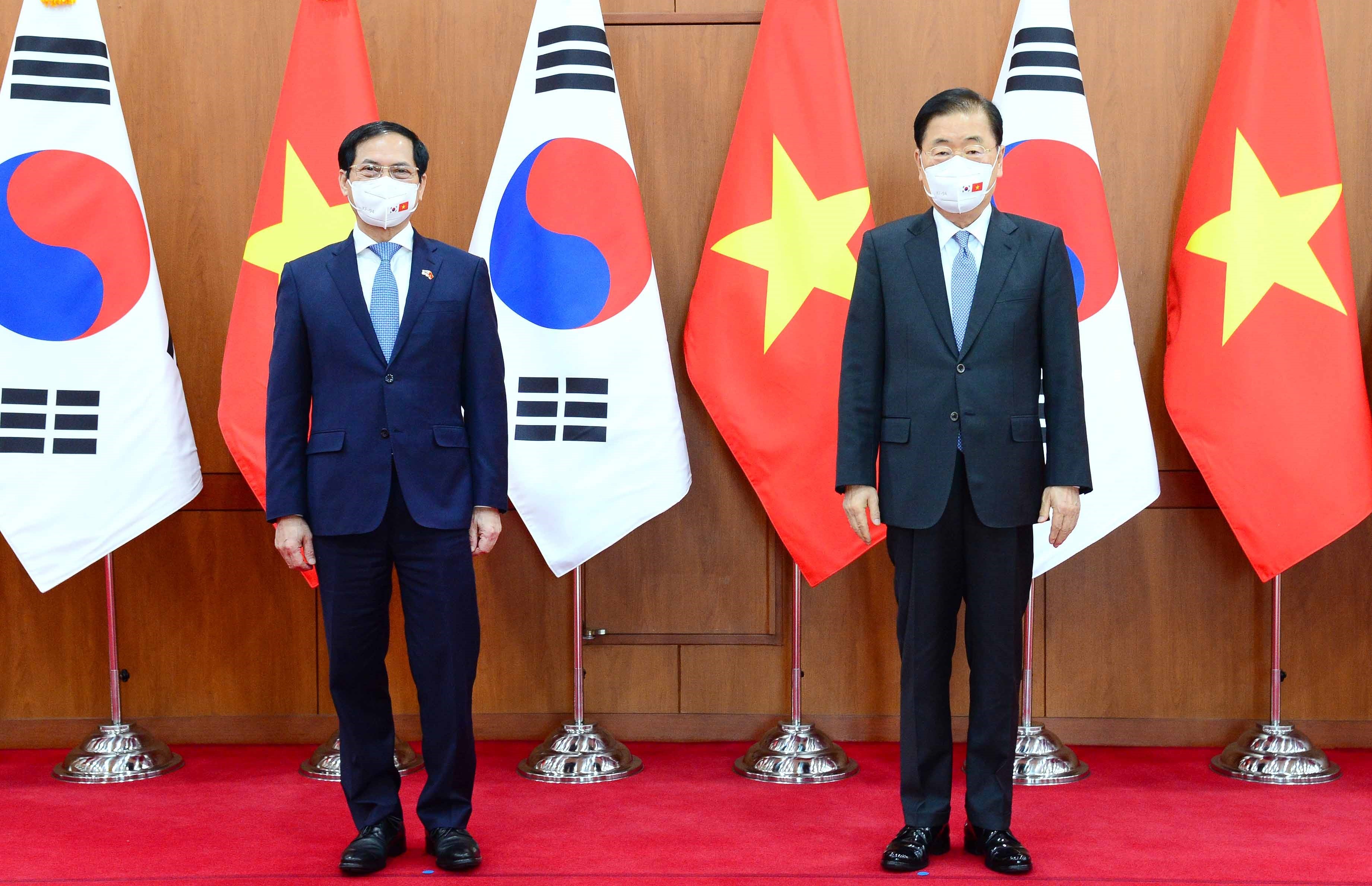 Minister of Foreign Affairs Bui Thanh Son, in his visit to the Republic of Korea (RoK) in February this year, remarked that the relations between Vietnam and the ROK are currently at its best.

The two countries have made significant progress in bilateral cooperation across all spheres, especially economic, cultural, and tourism aspects. Their relationship has gone a long way, marking its three decades of growth this year.

In April, 1992, Vietnam and the RoK signed an agreement on the exchange of the liaison offices between the two countries. In December the same year, they inked a joint statement on the establishment of ambassadorial-level diplomatic relations and the RoK opened its embassy in Hanoi. In March 1993, Vietnam opened its embassy in Seoul. In November 1993, the RoK General Consulate began its operation in the southern hub of Ho Chi Minh City.

Vietnam and the Republic of Korea set up their diplomatic relations in 1992 and lifted the ties to a strategic cooperative partnership in 2009.

In August 2002, the two nations issued a joint statement on their comprehensive partnership in the 21st century during the then Vietnamese President Tran Duc Luong’s visit to the RoK.

In October 2009, they lifted their bilateral ties to a strategic cooperative partnership, on the occasion of the then RoK President Lee Myeong Bak’s visit to Vietnam.

Despite the difficulties caused by the COVID-19 pandemic over the past two years, the two countries’ relations have been strongly promoted via the exchanges of delegations and bilateral contacts in various forms. The maintenance of regular meetings at all levels has contributed to enhancing their mutual understanding and political trust, creating a solid premise for cooperation between the two sides.

In late October and early November 2020, Speaker of the RoK National Assembly Park Byeong Seuk paid a visit to Vietnam, while the RoK visit made by National Assembly Chairman Vuong Dinh Hue took place in December 2021. Also noteworthy were RoK Foreign Ministers Kang Kyung-wha and Chung Eui-yong’s visits to Vietnam in the context of complicated pandemic developments, and Foreign Minister Son’s trip to the East Asian nation in early 2022. The Vietnamese diplomat’s visit marked the first key step in a series of the events as both nations are celebrating the 30th anniversary of their diplomatic relations, and seeking to officially elevate their existing strategic partnership to a comprehensive strategic one.

In March, President Nguyen Xuan Phuc and RoK President-elect Yoon Suk-yeol had phone talks, in which both leaders agreed to maintain the exchange of high-level delegations and meetings with various forms; support the strengthening of security, defence and defence industry cooperation; and closely cooperate in implementing activities to celebrate the 30th diplomatic anniversary towards upgrading the relations to a comprehensive strategic partnership.

The leaders held that the two nations will coordinate in implementing measures to lift their bilateral trade to 100 billion USD by 2023 and 150 billion USD by 2030; as well as effectively performing existing trade agreements such as the Vietnam – RoK Free Trade Agreement (VKFTA), and the Regional Comprehensive Economic Partnership Agreement (RCEP). Vietnam and the RoK will continue to cooperate closely in regional and international issues, and assisting the former in performing its role as the coordinator of the RoK-ASEAN relations in 2021-2024, they noted.

Bilateral cooperation thriving across all spheres

Since the establishment of the bilateral diplomatic ties 30 years ago, collaboration between the two nations has seen outstanding developments in all fields, bringing interests to both sides and helping promote mutual trust and understanding.

Setting aside the past and looking towards the future, Vietnam and the RoK shook hands and established official diplomatic relations 30 years ago to open up a new chapter in their history – Foreign Minister Son.

Regarding official development assistance (ODA), Vietnam has received about 20% of the RoK’s total. The East Asian nation’s total assistance to Vietnam has been valued at more than 500 million USD, 90% of which is ODA and 10% non-refundable aid. Serving the development cooperation, priorities have been given to transport and urban infrastructure, health care, education-training, environment, clean energy, and IT.

Apart from the ODA, the RoK has been ready to provide Vietnam with preferential credit loans through a financial cooperation framework to support the Southeast Asian nation in implementing large-scale infrastructure projects.

Concerning trade-investment, the countries’ bilateral trade stood at about 80 billion USD in 2021, surging close to 160 times from 1992. The turnover reached 66.8 billion USD in the first nine months of this year, up 18.2% year-on-year. The set target of 100 billion USD will be fulfilled by 2023 if the pace is maintained.

Also as of September 2022, the RoK had run some 9,438 valid projects worth 80.5 billion USD, ranking first in terms of registered capital and project number in Vietnam. It has remained its position as Vietnam’s top foreign investor for many years, with registered capital increasing by over 700 times since 1992. The focus of the FDI has shifted over time, moving from manufacturing industries in the 1990s to real estate in the early 2000s, and the production of advanced technological equipment at present. Korean firms play an important role in the Vietnamese economy, making up about 30% of the country’s combined export value.

There are about 200,000 nationals of either country living, working, and studying in the other. The friendship between the two peoples is increasing deepened through vibrant bilateral exchanges in terms of tourism and culture.

Before the COVID-19 pandemic outbreak, nearly 4.3 million Korean tourists came to Vietnam in 2019, making the East Asian nation the second largest market of the sector for Vietnamese. Meanwhile, the number of Vietnamese people traveling to the RoK increased 2.1 times in the 2016-2019 period, from 251,000 to 523,000.

After Vietnam reopened its door to international travel on March 15 this year, the number of Korean arrivals has increased rapidly to 500,000 in the first nine months. Also in the period, 100,000 Vietnamese visited the RoK which reopened its border in June.

To better serve the travel demand between the two countries, Vietnamese budget carrier Vietjet Air in July this year launched direct routes linking Vietnam’s Hanoi, Nha Trang, Da Nang and Ho Chi Minh City to Busan – a beautiful port city in the south of the RoK and well-known for its beaches, temples and the unique coloured Gamcheon culture village, romantic Haeundae Dalmaji Hill and Haedong Yonggungsa temple, among other hidden gems. In June, Korean Air – the RoK’s biggest airline – reopened its direct air route from Incheon to the central city of Da Nang, an attractive destination for Korean tourists.

Vietnam and the RoK have seen extensive cultural exchange, said RoK Minister of Culture, Sports and Tourism Hwang Hee in an interview granted to the Vietnam News Agency in January this year with regard to the meeting with his Vietnamese counterpart Nguyen Van Hung taking place earlier.

Hwang expressed his hope that the 30th anniversary will be a chance for the countries to learn more about each other’s history and culture, thereby creating an environment in which they can explore new cooperation fields such as sports and music.

Both Vietnam and the RoK hold great potential and enthusiasm, so the prospect of bilateral cooperation is considerable, Hwang Hee went on, noting that cultural exchange has an important role to play in helping create the foundation and momentum for sustainable development.

According to him, the two sides share many cultural similarities, with the Vietnamese and Korean peoples familiar to each other’s cultures. The Korean Cultural Centre in Vietnam, established in November 2006, is the first in Southeast Asia and has been acting as an ambassador in this field between the two countries.

The RoK will also exert efforts to popularise the Vietnamese culture to its people, the minister affirmed.

In addition, 76 Vietnamese localities have signed cooperation agreements with Korean counterparts and organisations. The Vietnamese community in the RoK and the Korean community in Vietnam have made active contributions to each country’s socio-economic development.

Setting aside the past and looking towards the future, Vietnam and the RoK shook hands and established official diplomatic relations 30 years ago to open up a new chapter in their history, said Foreign Minister Son, stating that such choice has proven correct as seen in the fruits of cooperation and development that the two countries are enjoying today./.